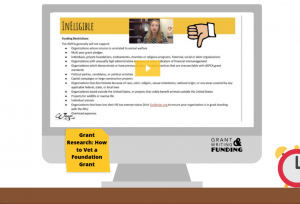 Grant Research: How to Vet a Foundation Grant 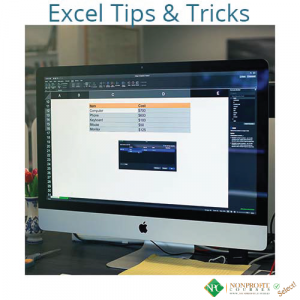 When was the last time you received a really good “thank you” from someone? Did someone send you a note thanking you for a birthday gift? Did a family member thank you for a favor you did for them? Chances are, if the appreciation note came as a letter, you didn’t immediately throw it away. And if it came in person, you may have thought the words over during your next commute.

The fact is that a note or token of genuine thank you sticks with us for a little while. You receive a warm, fuzzy feeling in your stomach when you know that someone truly appreciates you.

Nonprofits often don’t put enough stake and effort into their appreciation of supporters.  They frequently think a simple “thanks” will be enough. However, when you show real, genuine, heartfelt gratitude for your supporters, they remember it.

Showing appreciation to your supporters is a crucial part of developing a sustainable system for your organization. That’s because it plays directly into your donor retention strategy.

Retaining supporters is the best way to bring in consistent revenue, increase that revenue, and spend less on fundraising acquisition activities. On average, donor retention rates rest around 40% to 45%, but thousands of dollars more can be saved simply by increasing this by a few percentage points. Those percentage points become attainable when you work to build stronger relationships with your supporters, starting with (you guessed it) appreciation.

In this guide, we’ll walk through a few of our favorite strategies that nonprofits can use to improve their appreciation programs and increase retention with supporters. Specifically, we’ll cover:

Ready to jump into appreciation strategies? Let’s get started.

When a donor gives online to a nonprofit, they expect a confirmation email. It’s become common practice for them to receive a combined confirmation and appreciation email in response to their contribution. If this constitutes the extent of your appreciation efforts, you’re likely leaving donors feeling cold.

Ideally, your organization should be reaching for the stars to stand out from the crowd. That’s what helps build relationships and keeps them coming back. Therefore, it’s necessary to find a new and more personal way to communicate your appreciation.

We recommend calling your donors. When nonprofits call their donors within at least 90 days of their contribution to say “thank you,” first-time donors are more likely to give again, to give sooner, and to contribute more to the organization. 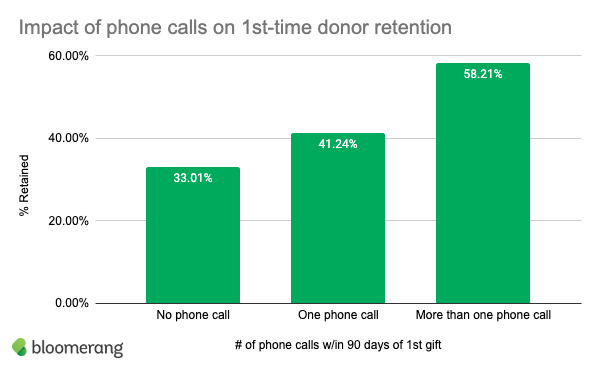 When you make these calls, they shouldn’t be completely aimless or unscripted, although they also shouldn’t be unfriendly or rigid. We recommend taking the following steps to prepare for these calls, while also ensuring they’re as natural as possible:

As our world has become more and more digitally minded, we have inadvertently taken the personalization out of many of our communication strategies. How connected do you feel reading an email or a social media post versus actually talking to someone on the phone? Picking up the phone or scheduling a time to connect via Zoom is a way to add that personal touch back into interactions.

Not all donors should be treated the exact same way. Everyone is unique and, therefore, different appreciation strategies will resonate more effectively with different groups of supporters. That’s why nonprofits group supporters into carefully selected segments for marketing and communications.

New supporters are also those who have the ability to give a “golden donation,” or the second gift that any individual gives to an organization. The majority of donors will only give a single donation to nonprofits. However, repeat donors (those who give the “golden donation”) are much more likely to continue contributing in the future. You can see the comparison of the new versus repeat donor retention rate below:

That’s why after you’ve acquired a new donor, it’s important to establish a relationship so that they’re more likely to contribute that second “golden donation” and continue giving into the future.

After you’ve created a new donor segment in your system, you should create a plan that’s devised specifically for them.

This timeline will give you ample opportunity to show your appreciation by email, phone, and mail. You can send information for the supporter to learn more about the mission, collect feedback, and invite them to get more involved. Then, you can ask for the second gift. Below is an example of a well-planned new donor timeline for nonprofits: 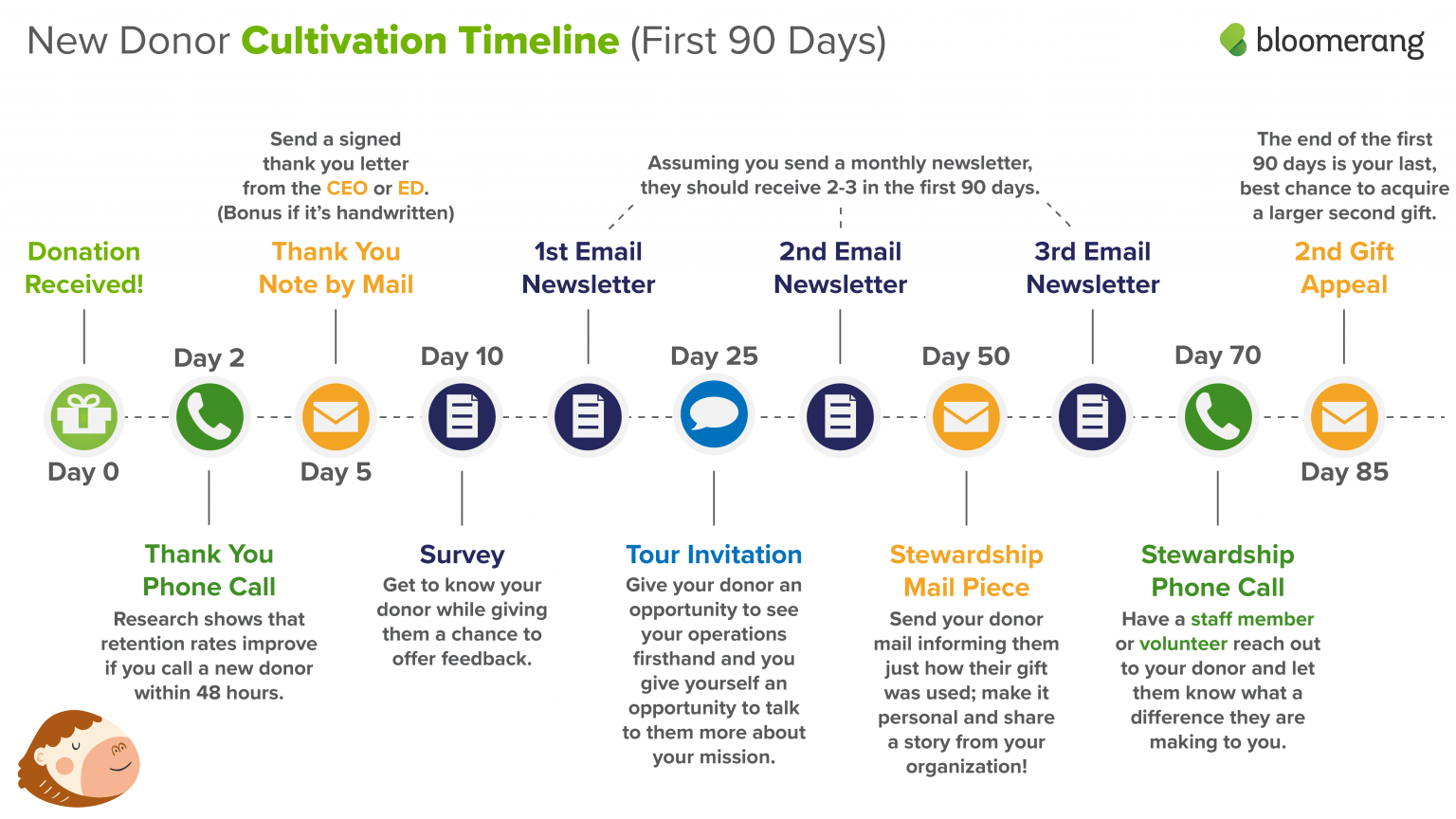 After you’ve acquired your second donation, that doesn’t mean your job is over. You’ll still need to put in the effort and work to continue stewarding your supporters and encouraging them to get more involved with your mission. However, having that strategy in place for the first few months of your new relationships ensures they’re off to a good start.

Donors don’t give to organizations; they give to missions. They’re not contributing to your organization just to help you out, but because they want their funds to go toward a good cause and you can help get it there.

Emphasizing the impact that donors have on your mission brings the note of appreciation back to the roots of the cause: your mission.

Your mission is the common goal that aligns both you and your supporters, which is why it’s such a great emphasis for effective appreciation strategies.

Your gift will provide [describe the actions you’ve taken and the impact the gift has made. Use specific details that correlate with the exact gift amount, like “Your gift has provided X amount of books for kids with low access to education.”]

Get as specific as possible with these impact statements. Remember the warm and fuzzy feeling that comes from a successful thank you that we talked about earlier? Generally, this statement is what accentuates this feeling. It also creates a level of transparency and trust between your organization and the donor, meaning they’re more likely to trust you with their money again in the future.

When you read up on various donor appreciation ideas, you’ll likely get a list of potential activities and actions that your organization can take in order to say “thank you.” However, you shouldn’t just pick the most creative idea you find (or worse, blindly point to pick one). Rather, you should make sure the idea is well-adept to suit your specific donors.

Consider your audience. If it helps, create an average persona (or several for each campaign). These personas will likely look drastically between organizations. For one, it might be a 35-year-old woman with children attending the local school. For another, it might be an elderly man dedicated to preserving the history of the town. Either way, knowing these traits will help you choose and design the best appreciation ideas to suit their interests.

Communicating appreciation for your donors is never a random process. It’s a very important part of your organization’s strategic plan and should be dealt with methodically. Carefully consider each element of the process from the platform, the message, the images, and the other elements you use to craft your note.

Showing appreciation for your donors is more than simply saying a quick, “thank you.” Rather, it’s an opportunity to enhance relationships, build trust, and help supporters dive deeper into your mission. That’s why it’s so crucial to create a concrete strategy for handling donor appreciation at your organization.

These four tips are by no means the only ways that you can show your appreciation. However, if you’re just getting started building your strategy, they are a great place to start. Good luck!

This was a guest post contributed by Jay Love of Bloomerang. 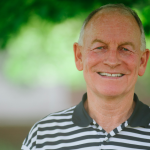 He has served this sector for 33 years and is considered the most well-known senior statesman whose advice is sought constantly.

Prior to Bloomerang, he was the CEO and Co-Founder of eTapestry for 11 years, which at the time was the leading SaaS technology company serving the charity sector. Jay and his team grew the company to more than 10,000 nonprofit clients, charting a decade of record growth.

Matt Hugg is the president of Nonprofit.Courses.